Measuring the right amount of each ingredient into a cocktail is vital to its success. Repeating this and producing the same cocktail over and over again with consistency is an essential element of bartending. This is why we work from recipes, with measurements, ensuring that we can produce consistent products. However, there are 2 different systems of measurements used around the world, metric and imperial, and they are ever so slightly different from each other. Both of these systems and their slight variations are explained here, as are other terms of measure that you may find in a cocktail recipe.

The metric system is the one most of us will be familiar with as it is the official system of measurement in almost all countries around the world. It can be used in two forms behind the bar, milliliters (ml) and centiliters (cl); with ml being the most common unit of measurement; however they’re both interchangeable with 1cl equalling 10ml. The IBA, International Bartenders Association, uses the metric system for all of their official cocktail recipes. They work in centiliters and therefore don’t use the term shot, rather they just note the cl equivalent.

These are your base measurements and any other terms of measure relating to shots, half shot, quarter shot, and so forth are the equivalent amount of a full shot. The shot of 25ml/2.5cl is considered a metric ounce and you will hear people refer to it as such; read on to find out about the Imperial or “original” ounce.

The Imperial measuring system is the archaic system of measurement, still in use in only 3 countries around the world; Liberia, Myanmar and the United States of America. However, because cocktails and cocktail culture originated in the USA, and it is more widespread there than anywhere else in the world, many and most cocktails recipes use imperial measurements. These measurements differ in size from their metric equivalents, and knowing how they measure up next to each other can be crucial in ensuring that you craft the perfect cocktail.

From this piece of information it is easy for one to derive the rest of the related measurements found in cocktail recipes; half ounces, quarter ounces, etc; and their conversions. It is important to note that in the USA 1oz does not equal 1 shot. In other parts of the world a single pour or shot is a designated measurement, however in the USA bars are free to define their own single pour and double pour. The national standard is that a single pour or shot is 1.5oz (44.3ml or 4.4cl) and a double pour is 2oz (59.14ml or 5.9cl). 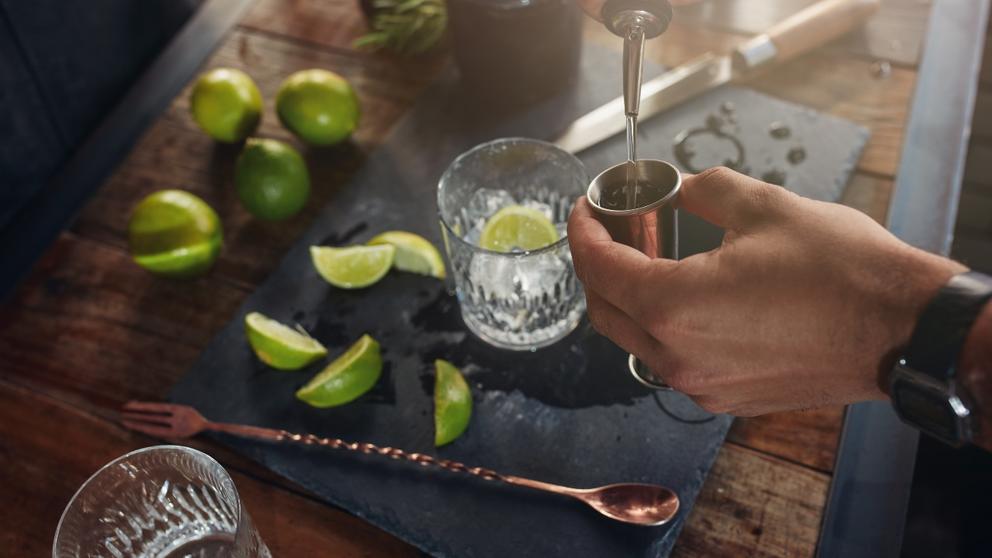 In recipes you won’t find just ml, cl and oz listed as measurements, there are many other out there that are used in the bartending world. You will find larger iterations of the above in cocktails recipes - especially for batched cocktails - such as the liter, gallon, cup and so forth. Some other terms used in cocktail recipes come from the American world of cocktail making therefore they are first defined in oz then converted into their ml equivalent.

1 Dash = One shake of a bitter bottle. There is actually no formal measurement for a dash.

Bar spoons across the world can differ in size, although standards are drifting toward 5ml.

Different countries have different laws regarding the service of alcohol and to go through all of them would be exhaustive for all of us. The establishment in which you work will be able to give you guidance on the legal requirements of alcohol service, measurements and pouring in your country. For example, some countries might require the use of official, government sanctioned jiggers, and require that either the metric or imperial system is used.

Free pouring is the skill of being able to accurately pour different measurements i.e. 1oz, 1/2oz, 2oz, etc; based on a counting system, without the use of a jigger. Such a skill takes time and practice, but once you’ve learnt it it will become second nature. There’re a couple of different counting methods which people use however the method is the same, and time is the biggest element of it. Here are the European Bartending School we teach free pouring in our International Bartender Course, which you can find right here!

It is worth noting that not all countries will allow the free pouring of drinks, and there are different country specific rules set forth. For example, in the USA anyone can free pour in their bar, however in Australia free pouring is not even an option for bars and bartenders, and in the United Kingdom bartenders must be trained and record and demonstrate their proficiency when free pouring drinks.

As you can see one fluid ounce (oz) is almost 20% bigger than the 25ml/2.5cl metric ounce. Often matching shot for shot in cocktails i.e. substituting 1 floz (29.57ml) with a metric, 25ml, shot, won’t do any harm, and can still produce an excellent drink; just ensure that you’re doing this with every ingredient in the recipe. When this can really become a problem is if you’re batching cocktails and don’t convert everything properly. Charts are easy to find on the internet and they’ll help you up-size recipes as well as convert them. Jiggers are available for both systems of measurement and there are now some out there which carry marks for both ml and oz; making using recipes that call for different measurement a breeze!